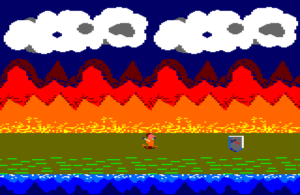 THIS IS JUST A JOKE! The contest of the Amstrad Expo ’04 was ‘April’s fool’. So we used this as a pretext to make a joke about the ‘DemoIzArt’ megademo (which is not a joke!) we’ve been working on for 8 years… We won the prize! This ‘megademo’ consists of an intro, a main menu and 3 parts! Of course all was made for them to be complete crap. Targhan drew most of the gfxs, and Grim wrote the songs!! You’ve never heard anything like that before!